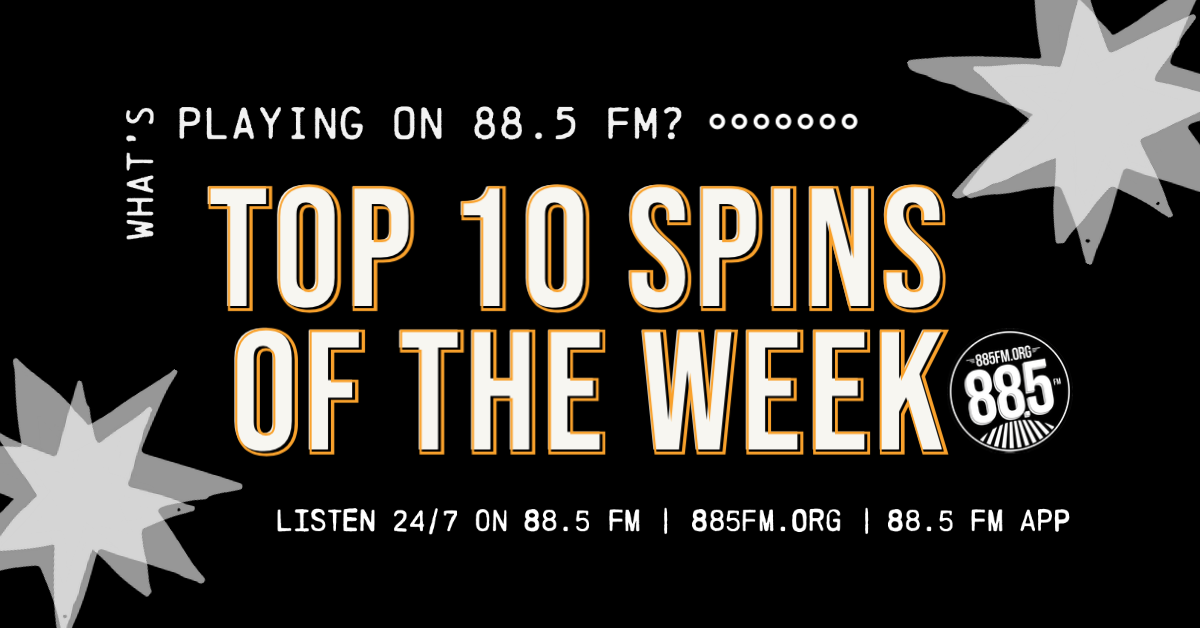 Published 23 days ago by Gala Albo

Here is The SoCal Sound's Top Ten Spins of the Week.

1. This band is back with a bang & brand new record on September 30th! The Yeah Yeah Yeahs is a collaboration dating back to 2000 with musicians Karen O, Nick Zinner, and Brian Chase. Their most recent single, "Burning," arrived two months after the release of "Spitting Off the Edge of the World," featuring Perfume Genius. 'Cool It Down' will be the band's fifth studio album. It will also be their first record in 9 years. You can catch the Yeah Yeah Yeahs on October 6th at the Hollywood Bowl!

2. This next artist has been a fan favorite for multiple decades. "Make A Picture" is from Andrew Bird's 2022 album 'Inside Problems.' The LP follows Bird's 2020 solo album 'Hark!' 'Inside Problems,' an 11-track record, was produced by musician Mike Viola. The SoCal Sound was fortunate enough to welcome Andrew as Artist In Residence in June & for an intimate members-only concert at No Vacancy in 2019! Andrew Bird will join singer-songwriter Sam Beam, also known as Iron & Wine, on September 22nd at The Magnolia in El Cajon!

3. The multi-talented Bret McKenzie released his album, 'Songs Without Jokes,' last month via Sub Pop Records. It's the Oscar-winning songwriter's debut solo album! "If You Wanna Go" was delivered ahead of the album alongside a music video directed by Ezra Simons. McKenzie is well known as half of the New Zealand comedy duo Flight of the Conchords. The duo's longtime collaborator Mickey Petralia produced Bret's debut album. 'Songs Without Jokes' features a multitude of musicians, including bassist Leland Sklar and drummer Joey Waronker. On November 14th, Bret McKenzie will be joined by a seven-piece band to perform at The Fonda!

4. 'Asphalt Meadows' is the forthcoming album from legendary rock band Death Cab for Cutie. This will be the group's 10th studio album and is expected for release on September 16th via Atlantic Records. This past July, the band released and performed one of the album's singles, "Here to Forever," on the Late Show with Stephen Colbert. The "Here to Forever" music video was written and directed by filmmaker Lance Bangs. Death Cab for Cutie will perform with Yo La Tengo this October at the House of Blues in Anaheim and The Greek Theatre in LA!

5. Maggie Rogers revealed her second studio album, "Surrender," to much critical acclaim! One of the album's singles, "Want Want," was recorded in three separate studios around the world with producers Kid Harpoon and Del Water Gap. The song's video was created by the illustrious music video director Warren Fu. Alongside her music career, Rogers continued her academic career after her 2016 graduation from NYU's Clive Davis Institute of Recorded Music. Earlier this year, Rogers became one of 11 students to graduate from Harvard Divinity School with a Master of Religion and Public Life degree. Maggie mixed, mastered, and recorded "Surrender" while attending Harvard.

6. Johanna and Klara Söderberg are currently preparing for the arrival of their new album 'Palomino.' This will be the duo's fifth LP, and it's set for release on November 4th. The name of their band, First Aid Kit, goes back to 2007 when a demo of their song "Tangerine" blew up and put the women on the map. "Out of My Head" will be the record's lead track, followed by another single, "Angel." At the beginning of this year, the band celebrated the tenth anniversary of their acclaimed sophomore album 'The Lion's Roar.' Unfortunately, First Aid Kit has no shows planned outside of Europe right now. However, if you go on their website, firstaidkitband.com, you can request and get updates about shows in Southern California!

7. This next artist represented her country in this year's Eurovision Song Contest. A week after she was announced as an Armenian representative, Rosa Linn revealed her entry song, "Snap." Before the release of "Snap," the singer-songwriter and producer only had one piece out; her 2021 debut track "King," featuring American singer Kiiara. After the contest, Linn's fan base grew exponentially. "Snap" became a viral success and helped her land a recording contract with Columbia Records!

8. "Free" is the second track off of Florence + The Machine's most recent album, 'Dance Fever.' Along with the single's release, the band created an iconic music video directed by the legendary Autumn de Wilde. "Free" was the fourth and final single, released three weeks before 'Dance Fever' arrived. Florence + The Machine will be supporting their new album on tour for the entirety of the next three months. The band will be visiting Southern California for back-to-back shows at the Hollywood Bowl on October 14th and 15th!

9. Vogue listed this next artist as one of "22 Rising Musicians Set To Rule 2022." Dora Jarkowski, most known as Dora Jar, released the single "Bumblebee" as a follow-up to her 2022 EP 'Comfortably In Pain.' Although her track record dates back to 2021, the musician has already played opening sets for prominent musicians like Billie Eilish! Dora will be going on tour this November, not as an opening act, but on her first headlining tour! She is expected to close out the month-long string of shows at the Troubadour on November 30th!

10. Omar Banos, also known as Cuco, released his sophomore album "Fantasy Getaway" just over a month ago. Since then, the Los Angeles local has garnered praise from every direction. This kind of distinction isn't new for Cuco. The musician self-produced his first body of work, 'Wannabewithu,' at the age of 18. Now 24, Cuco has worked with other influential artists such as Kacey Musgraves and Adriel Favela. The three most recently collaborated on a bilingual track entitled "Sitting In The Corner." The song is a staple feature on Cuco's new 12-song album!

Members Only: The Psychedelic Furs at The Belasco on Thursday, November 10, 2022
SIGN UP FOR FREE TICKETS HERE

Members Only: Encanto - Live to Film Concert Experience at Hollywood Bowl on Friday, November 11, 2022
SIGN UP FOR FREE TICKETS HERE

Members Only: Encanto - Live To FIlm Concert Experience at Hollywood Bowl on Saturday, November 12, 2022
SIGN UP FOR FREE TICKETS HERE
VIEW ALL EVENTS
ADVERTISE WITH US